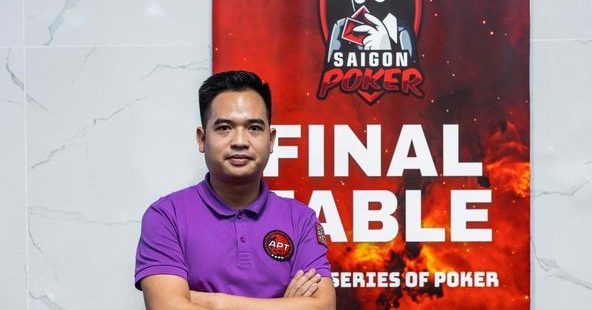 Trying to stay aggressive to remain in the competition, former chip-leader Vu Van Lich (Mr. Vu Gia) had been constantly raising to rebuild his stack. He finally got a caller when he raised on the CO and got called by BB Tran Tuan Anh.
The flop came: Ts7s4s and Tran checked. Vu shipped his remaining chips and was snap called by Tran. Vu revealed AsQc while Tran showed he had QsJs—a flopped Flush. Needing another Spade to stay alive, Vu missed it on the turn (Td) and the river (3c) to finish at fifth place for VND677,650,000.00 (US$29,139.00). An obvious favorite in these parts, Vu got a big applause upon his departure from the Final Table.

A few hands after, Singapore’s Yap Tian Yong decided to make a move to double-up, being the shortest stack remaining. His shove, however, was greeted by a call from Ha Van Thien. Yap showed QTo while Ha had pocket Kings. Despite the Q on the window card, no other cards came to bail Yap out as he crashes out in fourth place for VND906,240,000.00 (US$38,968.00).

No comments to show.