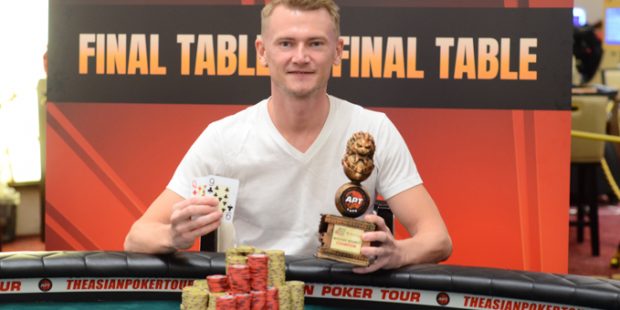 The first trophy of APT Philippines 2022 was awarded to Norwegian pro / two time APT Main Event champion Henrik Tollefsen at the Mystery Bounty opener. Tollefsen overcame a rollercoaster three-handed round against John Flores and Ellezer Castillo to capture the title and the Php 583,300 first place cash prize. In addition, Tollefsen won Php 291,000 in mystery bounty rewards for a combined payout of Php 874,300 (~US$ 16,690). This was his fourth career APT trophy. He now leads the APT Player of the Series race. For 3rd place Castillo, he collected the highest amount in bounty rewards making him the second highest earner.

The event kicked off at partner venue Resorts World Manila with 128 runners at Flight 1A and 126 turning up for Flight 1B for 254 total entries. Although most of the attendees were from the host country Philippines, a scatter of nationalities filled the tables including a good showing of players from Japan, Singapore, and USA. With buy in at Php 16,500 each, the guarantee was easily obliterated for a juicier Php 3,695,700 (~US$ 70,918) prize pool.

Once the money flowed, Christopher Mateo was the first player to draw a lucky Php 225,000 bounty reward then proceeded to fall in 22nd place. Flight A chip leader John Matsuda followed in 14th place, Brandon Mifsud in 13th place, and to form the final table, short stacked John Cordero busted to Flores in 9th place.

India’s Manish Lakhotia carried in the largest stack but it was shortest stacked Ellezer Castillo that impressed. Castillo only had 8 BB entering the final table but after chipping up, he knocked out fellow shorties Joshua Chargualaf  7th) and Joseroy Jeremias (6th) to have enough to send Federick Cruz packing in 5th place. Cruz had A♠ J♥ that missed against Castillo’s 2♦ 2♣.

The four handed round saw Lakhotia’s stack swing until he was dropped in 4th place by Castillo. This led to a lengthy three-handed bout where Tollefsen came from behind to deny the two Filipinos. Tollefsen avoided elimination with two double ups but lost a chunk on the third showdown when Flores rivered a higher pair. Tollefsen scored a big pot against the leader Castillo on a board 5♦ K♦ Q♥ 9♠ 9♥ with J♣ 10♠ straight besting A♥ 9♦ trips. Shortly after, he took the lead but lost it on a double up to Flores whose A♥ 7♥ dominated his A♣ 6♣.

With blinds rising, average stack was just 20 BB. Castillo fell to Flores in 3rd place pushing 9♦ 7♦ that run into A♣ 8♦. Before heads up got underway, Flores and Tollefsen agreed to split the last two bounty rewards for an additional Php 123,500 each. When play resumed, Flores was ahead 2:1. The first called shove was a double up to Tollefsen who then took the lead and never relinquished. One of the final hands was 7♦ 3♦ flush over 9♣ 8♥ two pair on a board 10♠ 8♦ 6♦ J♣ J♦ with bets on the flop and river by Tollefsen. This sent Flores below 10 BB which he pushed with J♣ 10♣ that failed against Tollefsen’s Q♦ 9♣.

Congratulations to Henrik Tollefsen! He is the first side event champion of APT Philippines 2022!!

No comments to show.